Home»World»The Truth About the “Multicultural” Invasion of Sweden
World

The Truth About the “Multicultural” Invasion of Sweden

Immigration is an issue that causes tempers to flare. Many Americans want our borders to be firmly closed to outsiders, especially if those outsiders are brown. Having lived in and been welcome in another country, and having brought my children to the United States, obviously, I’m pro-immigration.

But only to a point.

We had to jump through a lot of expensive hoops to legally be in the countries where we moved. I don’t think that the hoops should be as expensive as they are, but I definitely believe that some requirements must exist. We can’t allow an unchecked influx to upturn our culture.

Alternatively, many Americans want to welcome any and all refugees and immigrants, forming sanctuary cities – and even sanctuary states – that reject our immigration laws.

The law prohibits state and local police agencies from notifying federal officials in many cases when immigrants potentially subject to deportation are about to be released from custody.

Administration officials argued that the state measures not only hinder their ability to carry out federal law, but also put immigration agents and communities at risk.

During the election, Democratic candidate Hillary Clinton said it was our humanitarian obligation to take in refugees.

“We cannot allow terrorists to intimidate us into abandoning our values and humanitarian obligations. Turning away orphans, applying a religious test, discriminating against Muslims, slamming the door on every single Syrian refugee—that’s just not who we are. We are better than that.” (source)

Europe has opened their doors generously but now, they are filled with areas of high risk and looming flashpoints. Let’s take a look at what has happened in Sweden, where unchecked immigration has created a public safety crisis.

Sweden is a Scandinavian country of about 10 million people. The Swedes had a reputation of welcoming immigrants and refugees, but the arrival of 165,000 refugees in one year has caused them to take another look at their policies.

Sweden has been famously known for its welcoming attitude toward refugees and its commitment to family reunification. Until recently, it had the most generous immigration laws in Europe.

In 2014, Prime Minister Fredrik Reinfeldt made a famous speech urging Swedes to “open their hearts” to refugees seeking shelter. A year later, the population of just 10 million welcomed 165,000 asylum seekers to Sweden — more per capita than any other European nation.

The unprecedented number of newcomers has challenged the Swedish economy and has contributed to instability in the country’s historically stable government.  (source)

But a strained welfare system isn’t the only issue with the influx of refugees.

The crime in Malmo and Stockholm has skyrocketed. You can read about it in these articles:

Rape of teens in that same date and age range is up 19 percent.

Attempted rape of girls under 15 increased 16 percent; rape of young girls in that same age increased by 26 percent.

Around that same time, in 2015, more than 160-thousand people applied for asylum in Sweden from war-torn countries in the Middle East and Africa. (source)

The politically correct laws of Sweden mean that the perpetrators cannot be described to the public, including their ethnicity. The women of Sweden have had to change how they live or risk attack.

In the southern city of Malmö, local media reports there have been four reported gang rapes since November 2017.According to reports, all four happened overnight in the early-morning hours.

As of this posting, there were no arrests, which has left some feeling alarmed.

Here are some women who describe their thoughts on the reports:

@PeterSweden71 is a journalist who has been documenting horrific crimes for a few years now. Here are a few of his tweets from JUST ONE DAY, April 19th, 2018. 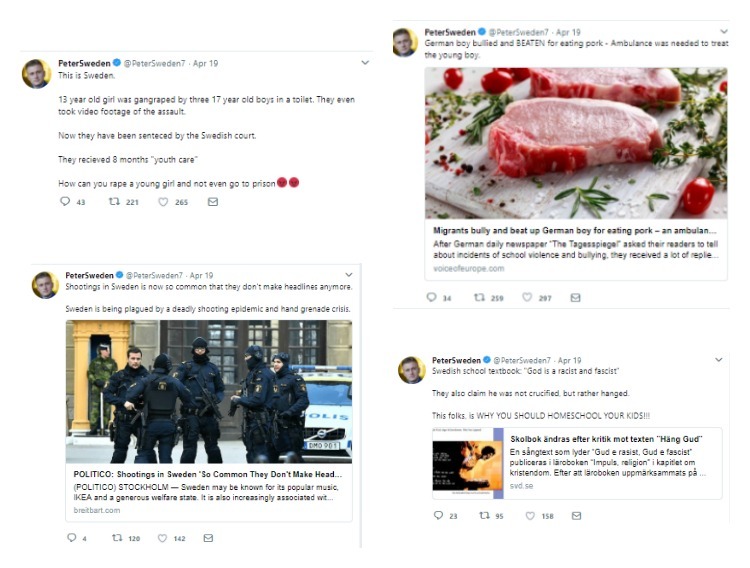 The fact that much of the crime is committed by migrants in a no-go zone is swept under the rug, which is pointed out in this article in Sputnik News (a Russian government-controlled news agency).

Here’s what the police officers have to say about it.

Peter Springaire, a police officer of 47 years was investigated by prosecutors for “inciting racial hatred” due to his viral post on Facebook.

I’m so fucking tired. What I will write here below is not politically correct. But I don’t give a shit. What I am going to say to you all taxpayers is forbidden to give us state employees…

Countries representing this week’s all crimes: Iraq, Iraq, Turkey, Syria, Afghanistan, Somalia, Somalia, Syria again, Somalia, unknown country, unknown country, Sweden. Half of the suspects we can’t know for sure because they don’t have any valid papers. Which usually means they lie about nationality and identity.

And Springaire isn’t alone. Watch the clip below. A friend in Sweden has confirmed that the English subtitles are indeed accurate. If a picture is worth a thousand words, then this video is worth a million.

The people in the video have no interest in listening to the police or abiding by the laws. Their goal is to intimidate and do whatever they please.

Before the flurry of frenzied accusations begins, I’m not being a racist to point out the fact that some areas of Sweden have been completely taken over by people who have no interest in assimilating into the culture of their host country. The stories above clearly illustrate this is the truth.

While our population is much larger than that of Sweden, we risk similar issues with a flood of immigrants flocking en masse to condensed areas. This isn’t to say that we should never accept any refugees. We’re a country that was built on immigration. But, we can be compassionate without being foolish.

I’m not talking about building walls and slamming the door in the faces of travelers. I’m not talking about mistreating those from different cultures, and I certainly don’t want to see the United States take part in the same kind of insanity that resulted in the internment of Japanese-Americans during World War II.

But we need to ask better questions of those who want to relocate to our country. We must make sure that the people whom we invite in are coming because they’re excited about being Americans. We want to invite people who want to make our country better and stronger.

We don’t want a surge of people who refuse to abide by our laws or who wish to enforce their religious beliefs on others.  Our constitution guarantees us not only the freedom OF religion but also the freedom FROM religion.

Sweden is a cautionary tale. Right now Europe is full of these warnings but many still refuse to heed them.

As the old saying goes, those who do not learn from history are doomed to repeat it.

I was hesitant to write this article because I know that some people will not examine this by the facts presented, but will be outraged that I dared to draw a conclusion that may not be politically correct. I urge you to get past your reflex to accuse me of racism and speak to the facts. Tell me how to avoid a problem like they’re facing in Sweden.

What Will Weapons Inspectors Find in Syria…And Does it Matter?

The Truth About the “Multicultural” Invasion of Sweden