Genocidal Muslim Doctor Lara Kollab’s barring from the medical profession should be a foregone conclusion. She vowed to “purposely give Jews the wrong meds,” amid of steady stream of vicious antisemitic comments and tweets. For years she ululated the most racist and genocidal denunciations of the Jews and discussed destroying Jewish immune systems while studying medicine.

The issue isn’t whether she caused people emotional pain, but that someone trying to be a doctor was discussing poisoning a particular ethnic group with the wrong medicines. This is a compelling reason to make sure that she never has a position where she’s able to work with anything more advanced than frogs. […]

Someone who openly fantasizes about using their profession to inflict harm on a population should never be allowed to practice medicine.

Frankly, this is something that warrants deeper study. I have had a number of emails over the years from Jewish patients who said they were deliberately harmed by their Muslims doctor(s). 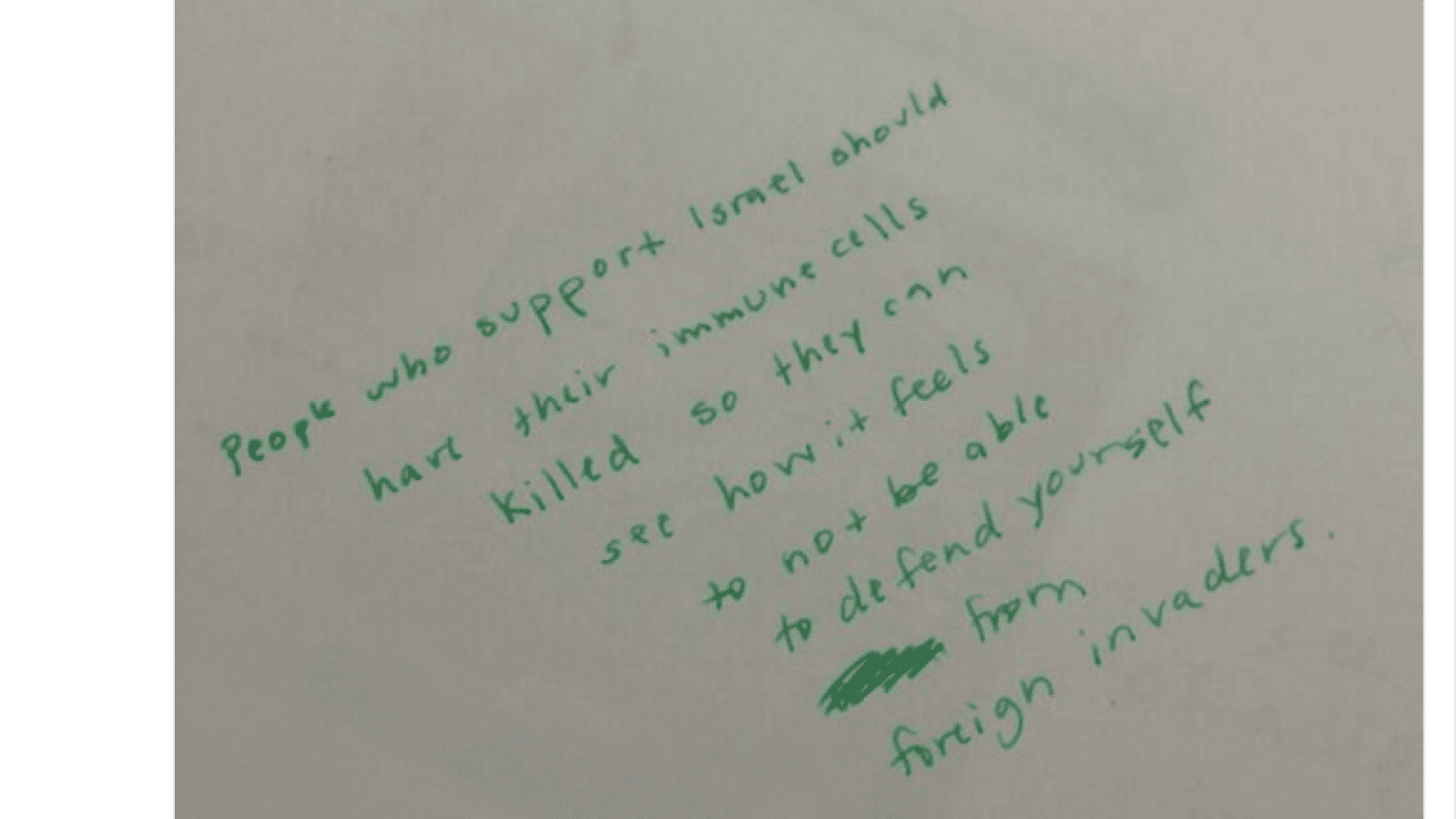 TRUMP LAWYER: ANTI-SEMITIC DOCTOR MUST BE BANNED FOR LIFE

A prominent conservative lawyer and attorney for President Donald Trump has called on state officials in Ohio to permanently revoke the medical license of a resident physician who was fired recently after it was revealed that she had made a number of anti-Semitic social media posts.

On December 31st, the Cleveland Clinic announced that it had severed ties with Lara Kollab, a 27-year-old resident physician, after a number of anti-Jewish comments she had made came to light.

“This individual was employed as a supervised resident at our hospital from July to September 2018. She is no longer working at Cleveland Clinic. In no way do these beliefs reflect those of our organization. We fully embrace diversity, inclusion and a culture of safety and respect across our entire health system,” the statement said.

Kollab, who was issued a temporary medical license by the state of Ohio to work at the Cleveland Clinic under supervision, retains her license, though she is unable to practice medicine with it unless she is hired by another clinic or hospital.

Jay Sekulow, the chief counsel for the American Center for Law and Justice and a member of President Trump’s legal team, has called on Ohio’s medical board to revoke Kollab’s license, saying that given her history of open bigotry and suggestions she’d misuse her position, she should be banned from practicing medicine – for life.

In an opinion piece published by Fox News, Sekulow wrote that the ACLJ and the Zionist Organization of America were working together “to ensure that Kollab never practices medicine again,” Sekulow wrote.

“The ACLJ is filing a formal complaint – in conjunction with the ZOA – with the Ohio State Board of Medical Examiners noting that Kollab’s ‘statements and intentions go far beyond the realms of free speech. Allowing her near any patients could literally jeopardize lives. Dr. Kollab is obviously unfit to practice medicine.’”

“No patient should ever have to seek medical help in a facility that employs a doctor who is so full of hatred in her heart necessary to commit violence upon another person. The trust between a patient and a medical professional is so essential that any suggestion of violence should be investigated thoroughly and dealt with promptly. In Dr. Kollab’s case the actual written statements speak for themselves.”

The Canary Mission, a website dedicated to monitoring anti-Semitism among anti-Israel activists in North America, discovered Kollab’s social media comments, which included praise for the Hamas terror organization, comments downplaying the Holocaust, expressing satisfaction that “Allah will kill the Jews”, and claims she intentionally gave Jewish patients the wrong medication.

“Hahha ewww… ill purposely give all the yahood [Jews] the wrong meds,” wrote in 2012.

Later that year, Kollab called for the “defeat” of “the Zionist state through force”, as opposed to diplomacy.

“After repeated failed diplomacy, our aim is to defeat the Zionist state through force,” Kollab tweeted, and later wrote that it was her “goal in life” to “expose” Israel “to everyone I meet. If I can twist a biology paper to include your crimes, I will do it.”

Also in 2012, Kollab said she was “sorry not sorry” that she was going to be “brutally unsympathetic” to the plight of Jews in the Holocaust.

“After this debate, I have to watch a movie on the holocaust and write a paper on it. I am going to be brutally unsympathetic. #sorrynotsorry.”

“If I have to write a paper about the holocaust, I’m going to bring palestine into it and my professor better like it.”

Kollab later wrote that she believed the Holocaust was “exaggerated” and that the “victimization of the Jews” was “overdone”.

“I don’t mean to sound insensitive but I have a REALLY hard time feeling bad about Holocaust seeing as the ppl who were in it now kill my ppl.”

“So hard for me to not roll my eyes when the prof was saying that for our midterm, we have to watch a movie about the Holocaust+write a paper.”

Kollab also compared Jews to dogs, writing in 2013 that the Israeli port city of Haifa is “full of Jewish dogs, and it looks like America, meaning, it wasn’t that special to me.”

While studying for a medical exam, Kollab tweeted a picture of “notes” she wrote to herself which read “People who support Israel should have their immune cells killed so they can see how it feels not to be able to defend yourself from foreign invaders.”

After the Cleveland Clinic announced it had terminated her, Kollab released a statement via her attorney Ziad Tayeh apologizing for her past comments.

“I wish sincerely and unequivocally to apologize for the offensive and hurtful language contained in those posts. This statement is not intended to excuse the content of the posts, but rather to demonstrate that those words do not represent who I am and the principles I stand for today.” 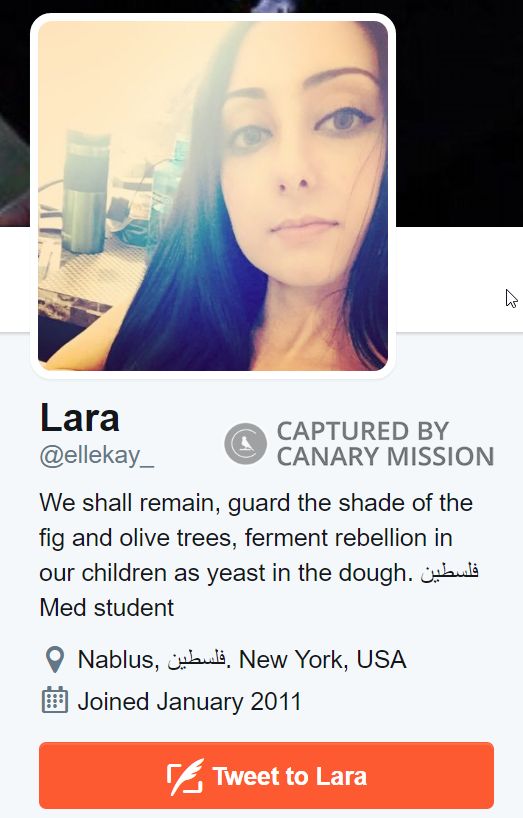 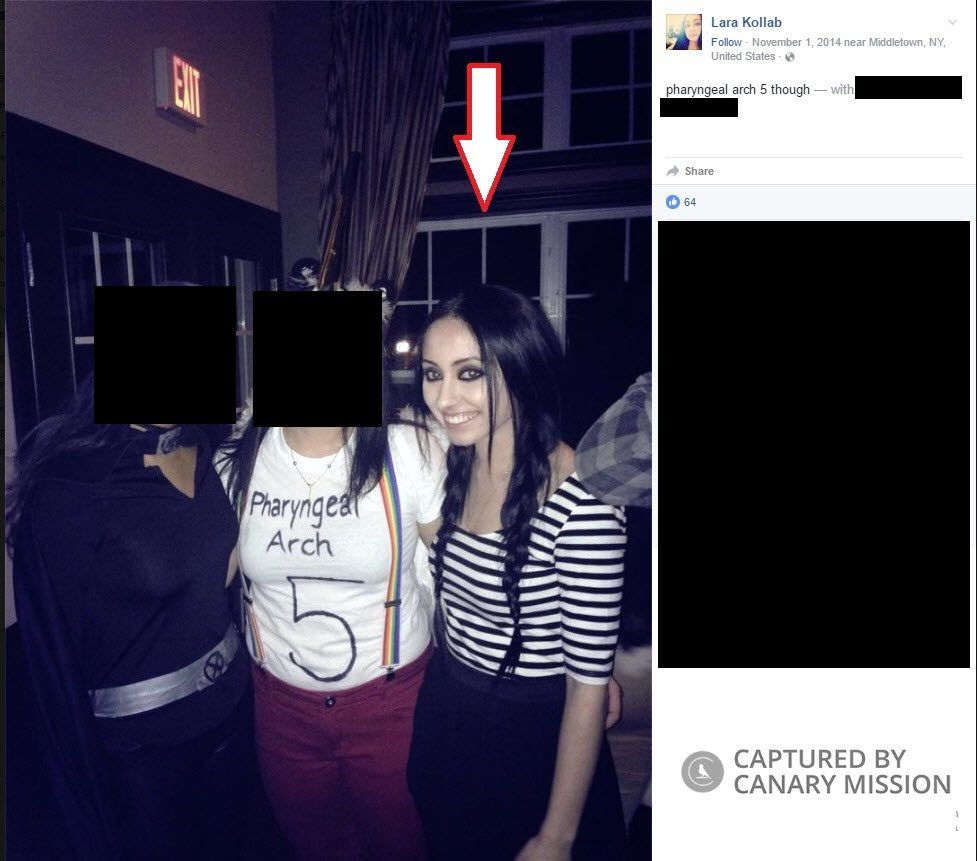 Bisexual Senator Loves the Constitution Yet, Shuns the Author - Then On Whose Behalf is She Serving?