Trump To Jeff Sessions: Put An End to Russia Probe – Prosecutors Doing Mueller’s ‘Dirty Work Are A Disgrace’ To America

Finally. President Donald Trump took to Twitter Wednesday to call on his Attorney General Jeff Sessions to shut down special counsel Robert Mueller’s investigation into Russian interference in the 2016 election.

Sessions is a weak sister. He has to go. This leftwing witch hunt has been ongoing since day one of Trump’s presidency in order to impair and impede his ability to get the job done. It’s a stealth coup.

Sessions is a weak sister.  He has to go.

BREAKING NEWS: TRUMP TELLS JEFF SESSIONS TO PUT AN END TO RUSSIA PROBE AS HE CLAIMS PROSECUTORS DOING MUELLER’S ‘DIRTY WORK ARE A DISGRACE’ TO AMERICA

Donald Trump has ratcheted up his pressure on Attorney General Jeff Sessions, saying in a tweet that the Attorney General of the United States should step in and put an end to Special Counsel Robert Mueller’s long-running Russia probe

‘Attorney General Jeff Sessions should stop this Rigged Witch Hunt right now,’ the president tweeted. ‘Bob Mueller is totally conflicted, and his 17 Angry Democrats that are doing his dirty work are a disgrace to USA!’

The White House ignored a Wednesday Wednesday about whether Trump will push the envelope further and order Sessions to fire Mueller.

Trump’s mention of 17 prosecution lawyers is a reference to what he claims is an abundance of Democrats on Mueller’s staff. The special counsel himself is a Republican.

Sessions, who was a Trump campaign adviser and the first sitting senator to endorse his candidacy, recused himself from the Russia probe in March 2016 because he expected the campaign to be one focus of the investigation.

That gave the reins to his deputy Rod Rosenstein, who later appointed Mueller.

Trump has publicly criticized Sessions before, tweeting in June that the Mueller ‘witch hunt’ was only proceeding ‘because Jeff Sessions didn’t tell me he was going to recuse himself.’

‘I would have quickly picked someone else. So much time and money wasted, so many lives ruined … and Sessions knew better than most that there was No Collusion’ with the Kremlin,’ he added. 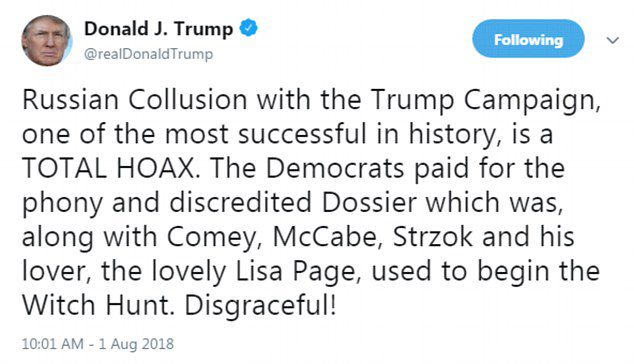 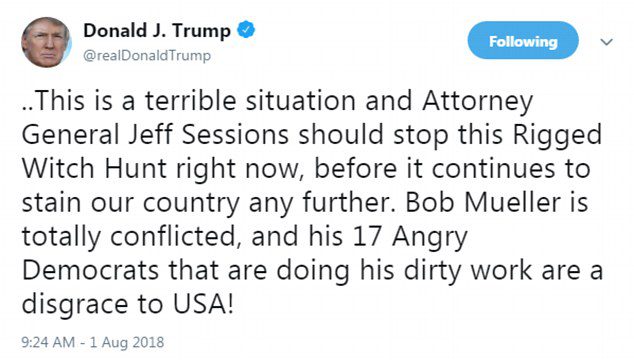 The allegations in that trial, which began Tuesday, are related to Manafort’s financial dealings long before he was involved in the 2016 election cycle.

But firing Mueller would likely send a signal to Democrats that the White House is worried about potential blowback from a Manafort conviction just three months before the congressional midterm elections.

Still, Trump went all-in with a new intensity on Wednesday, opening up on Mueller and his team with both barrels of his massive Twitter following.

‘Russian Collusion with the Trump Campaign, one of the most successful in history, is a TOTAL HOAX,’ he wrote.

‘The Democrats paid for the phony and discredited Dossier which was, along with Comey, McCabe, Strzok and his lover, the lovely Lisa Page, used to begin the Witch Hunt. Disgraceful!’

Trump To Jeff Sessions: Put An End to Russia Probe – Prosecutors Doing Mueller’s ‘Dirty Work Are A Disgrace’ To America