Home»US»Tyrannical Government Hunts Down Parents Of 3-Year-Old, Forces Child To Undergo Chemo, Then Strips Parents Of Their Custody
US/Videos

Tyrannical Government Hunts Down Parents Of 3-Year-Old, Forces Child To Undergo Chemo, Then Strips Parents Of Their Custody

When there is clearly neglect of a child, someone must step in and do something to ensure that the child is protected, but many times, I have become aware that the state quite often violates its jurisdiction and inserts itself into something it has no knowledge of nor business being involved in.  This is the situation involving 3-year-old Noah McAdams and his parents, Taylor and Josh.  Not only were the parents reported by Johns Hopkins All Children’s Hospital to authorities, but the government forced them to reluctantly submit their little boy to chemotherapy and later would strip them of their parental rights and custody of their son.  However, surprise!  The media failed to report the entire story and made the parents out to look like criminals.

Florida Freedom Alliance has the story.

In early April, three-year-old Noah McAdams was diagnosed with acute lymphoblastic leukemia at Johns Hopkins All Children’s Hospital (“JHACH”).  Noah’s parents, Taylor and Josh, reluctantly agreed to two rounds of chemotherapy, after being made aware the courts could and would force them to comply.  They also implemented additional supportive therapies proven to treat cancer. After the second round of chemo concluded, Noah and his parents celebrated that there was no longer any detectable cancer cells in his blood.  However, due to the laws in Florida, children under 18 are required to undergo the full recommended treatment plan of the pediatric oncologist, which is typically 2-4 years, regardless of the progress or desire for alternative opinions or treatments. Yes, children are being forced to continue undergoing toxic treatments even when their bodies are free of any cancer.

Noah’s informed and dedicated parents decided to pursue a second opinion and scheduled him to be seen by a specialty physician in Kentucky.  Upon notification that the family was seeking an alternative opinion, JHACH proceeded to call them numerous times with demands. Ultimately, Johns Hopkins contacted government agencies, and reported the family for not showing up to their appointment, even though they had been notified and a full explanation of the plan to seek another opinion had been expressed to doctors multiple times by Taylor.  After being hunted down like criminals for simply exercising their rights, Noah was removed from his loving, attentive parents, placed into state custody, and returned with a stranger (case worker) to Florida. Upon his return he was admitted to Johns Hopkins where he stayed and was examined for 2 days, kept in a crib bed (enclosed cage-like contraption meant to contain infants during hospitalization) and forced to wear diapers, despite being an active, potty-trained 3 year old. JHACH, and the hospital in Kentucky that assessed Noah prior to his return to Florida, have confirmed various times that Noah’s blood tests continue to indicate that he is cancer free.

The media refuses to cover the totality of this story and continues to paint a picture of neglectful parents refusing life saving treatment for their child.  That simply couldn’t be further from the truth. Noah was thriving with his parents; his body was being supported by specific and proven cancer inhibiting nutritional components, supplements, herbs, and other alternative therapies.  Taylor and Josh are devoted, nurturing, informed parents who have dedicated their lives to finding the best treatment options for their son. They have notebooks of data, detailed daily assessments of Noah’s physical and emotional state, every sleep cycle, and every behavioral inconsistency. The amount of care these parents dedicate to their son is admirable and a far cry from neglect. Not only was it outwardly obvious that Noah was healing while in their care, but internal assessments also indicated a healthy, flourishing child. Since being taken into state custody, however, Noah’s physical and emotional health has visibly declined.  The preemptive steroids ordered before commencing the next round of chemotherapy have left Noah swollen and irritable and taken quite the toll on his little body causing him to have bloody stools and consuming severed muscle weakness, preventing him from walking. He has experienced multiple known side effects of the various medications he’s been given, but symptoms have been repeatedly dismissed by the healthcare providers, despite some of them being documented as cause for being seen by your physician immediately. 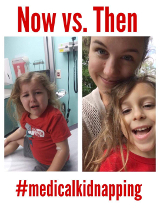 In reality, chemotherapy drugs and coinciding protocols are risky and carry many dangerous side effects, including secondary malignancies and death.  Any parent is reasonable to have concerns about the use of these poisonous agents for their child. Adult cancer patients are allowed the freedom to explore alternative treatments, to pursue second opinions, to pick and choose which actions they do or do not take to address their disease.  This same liberty should be given to children and their families. Our youth deserve more than the forced poison they’re presented with. They deserve more than the 4% of funds from cancer research they’re given. They deserve to have bodily autonomy and to seek a plan of care that they are comfortable with.  They deserve to make decisions free of threats from a for-profit industry more focused on their bottom line than patient outcomes.

Despite Noah’s multiple tests showing his body is cancer free, an emergency order for chemo has been proposed and this dangerous and damaging protocol is set to continue.  Despite Taylor and Josh’s cooperation, despite evidence of their dedication to and care of their child, despite the overwhelming fact that Noah was healthier and happier in the care of his family, the state of Florida continues to pursue this heinous overreach of power. Coercing families to accede to their children undergoing medical treatment they are not comfortable with is a direct violation of human rights, informed consent, Nuremberg Code of Ethics, and frightful abuse of the government’s authority.  The only ones neglecting Noah are the ones who assisted in having him ripped away from his loving, healing parents.

Cases like Noah’s are not uncommon. The laws in this country surrounding pediatric cancer treatment are unconstitutional and violate not only the fundamental freedoms of the child, but the inalienable rights of the parents. The government has no place mandated medical intervention and this gross overreach of power should incense every citizen of this country. Help Noah and his family and those like them fight for medical freedom, help us fight medical kidnapping by implementing Noah’s Law by making a donation below.

For an eye-opening view of the truth about what’s going on in this country with children and forced chemotherapy, check out Flipping the Script. We do not have any affiliation with this documentary or its makers, we are simply defenders of freedom and seekers of truth.

An update to the story was posted when the Florida Health Alliance contacted the Johns Hopkins All Children’s Hospital with the following letter.

Going to the hospital can be advantageous when you have a very serious health condition.  However, as the McAdams family, and even my own, have come to discover, it can also be a very frightening and lawless experience as well.

If you would like to contribute their legal defense fund, learn more here.

Let John Hopkins Children’s Hospital know your opinion on this matter via through their Facebook Page.

While Trump Continues To Violate The Constitution, SOL’s Kate Shemirani Is Over The Target

The Dollar Is Being Collapsed By Design: “Buckle Up! This Is Going To Be Epic!”

A Third Of A Million People Are Calling For Jihad Rep. Rashida Tlaib To Be Removed From Office For This

Tyrannical Government Hunts Down Parents Of 3-Year-Old, Forces Child To Undergo Chemo, Then Strips Parents Of Their Custody