“The Science,” we have been told since March 2020, is the rigorous set of guidelines that must be “followed” with unquestioning obedience in order to reduce the spread, flatten the curve, return to normal, get our freedom back, end the lockdowns, or any other arbitrary carrot placed on the stick (yes they literally said this) that is wielded by the tyrant class.

If you don’t follow said “The Science” you are a science denying buffoon who wants grandma to die, doesn’t care about the children, are an alt-right Trump humper, a white supremacist, extremist, and most likely a domestic terrorist.

In reality, however, people who questioned the lockdowns were merely making observations that were plain to see. Having a control group in Sweden helped the world see early on that draconian lockdowns were unnecessary but if you mentioned this, you were “fact-checked” into oblivion.

As time passed, however, the alleged fact checkers would be proven wrong and Sweden didn’t become the bloodbath they hoped and prayed for. Instead of watching their economy crumble, their businesses close down, and their freedoms turn to dust, Sweden largely remained unscathed during covid thanks to their government taking a laissez-faire approach to the pandemic.

Government, Media, a bunch of scientists and doctors, half of the world: "If Sweden doesn't immediately lock down, there will be mass deaths and suffering! Sweden wants people to die!"

New figures from the World Health Organization this week show that team doom was dead wrong on their policies. The WHO released estimates of excess deaths — people who died directly and indirectly from Covid — and the numbers don’t bode well for the lockdowners. As the Telegraph reports:

Sweden, which was criticised in the early stages of the pandemic for resisting a mandatory lockdown, had fewer deaths per capita than much of Europe. 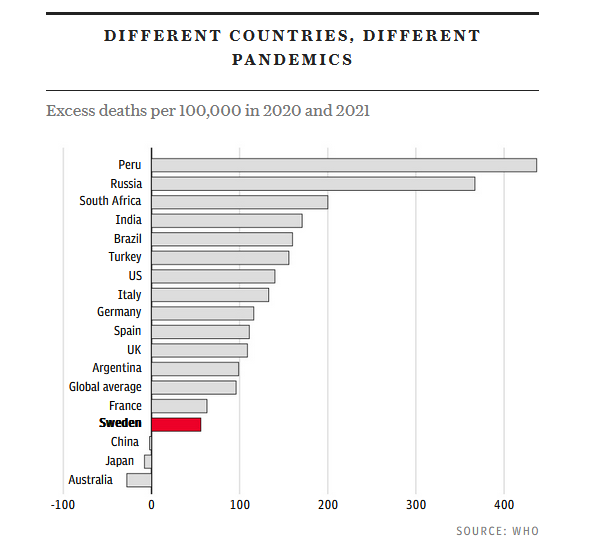 Experts noted how Sweden encouraged people to take care of their health instead of simply masking up and staying inside — the opposite of what the United States did.

“The lesson from Sweden is to invest in your population’s health and have less inequality,” Prof Devi Sridhar, the chairman of global public health at the University of Edinburgh, told The Telegraph.

On the contrary, in heavily locked-down Britain, “there have been too many preventable deaths,” according to Dr Michael Head, a senior research fellow in global health at the University of Southampton. “By the end of the pandemic, it’s likely that the UK will probably end up mid-table on various metrics that measure pandemic performance, such as excess mortality,” he added.

In fact, some 68% of deaths during the pandemic came from just 10 countries, including the United States, Russia and India.

But Colin Angus, a modeller at the University of Sheffield who was not involved in the study, said the WHO’s methodology “looks entirely sensible”, adding that excess death estimates are critical to hold governments to account.

The figures were compiled by a panel made up of international experts who have been working on the data for months, using a combination of national and local information, as well as statistical models, to estimate totals where the data are incomplete.

It’s almost like the Free Thought Project had been reporting on this for the last two years.

Every time the cases shot up, the politicians took to their podiums and blamed the citizens for not following their arbitrary and often entirely unscientific dictates close enough. More force was threatened and more arbitrary rules were rolled out. Despite the utterly horrifying effects of the lockdowns, politicians across the world kept forcing them on the citizens.

Politicians, all claiming to “follow the science,” locked us down, destroyed the economy, decimated the middle class through inflation, forcibly medicated us, and muzzled our children over the last two years — and for what?

Where is the accountability for the folks who advocated these things? Are we to forget about the two weeks to flatten the curve that turned into rampant police brutality for non-compliance, tens of thousands of closed businesses, vaccine passports, and record child suicides?

As the lockdown tyrants slowly shift their narrative in an overt attempt to move from the wrong side of history to the right side, we must remind them that it is too late. They are no longer relevant and their censorship, quack science, and tyranny will never be forgotten.