Somali immigrants in Minnesota who are now working for Amazon staged a walkout protest on Friday to demand a more Islamic workplace.

The protesters, many of whom are “refugees” claiming victimhood status in America which has been generous enough to accept them from the terror hotbed otherwise known as Somalia, are demanding that Amazon give them longer breaks for Islamic prayers. Muslims pray five times a day, which means the Muslim employees at Amazon in Minnesota are requesting at least 5 paid breaks a day.

It is worth noting that one never hears stories about Jewish and Christian employees who work for Amazon and other large companies staging protests demanding more breaks for so-called “religious reasons”. On Fridays, Jews celebrate Shabbat, yet you never see Jewish employees who work at Amazon demanding the company pay them so they can leave early to go home and pray. Praying is an extracurricular activity that is separate from one’s job, and employers are not responsible for making sure people are able to hold religious services while on the clock. 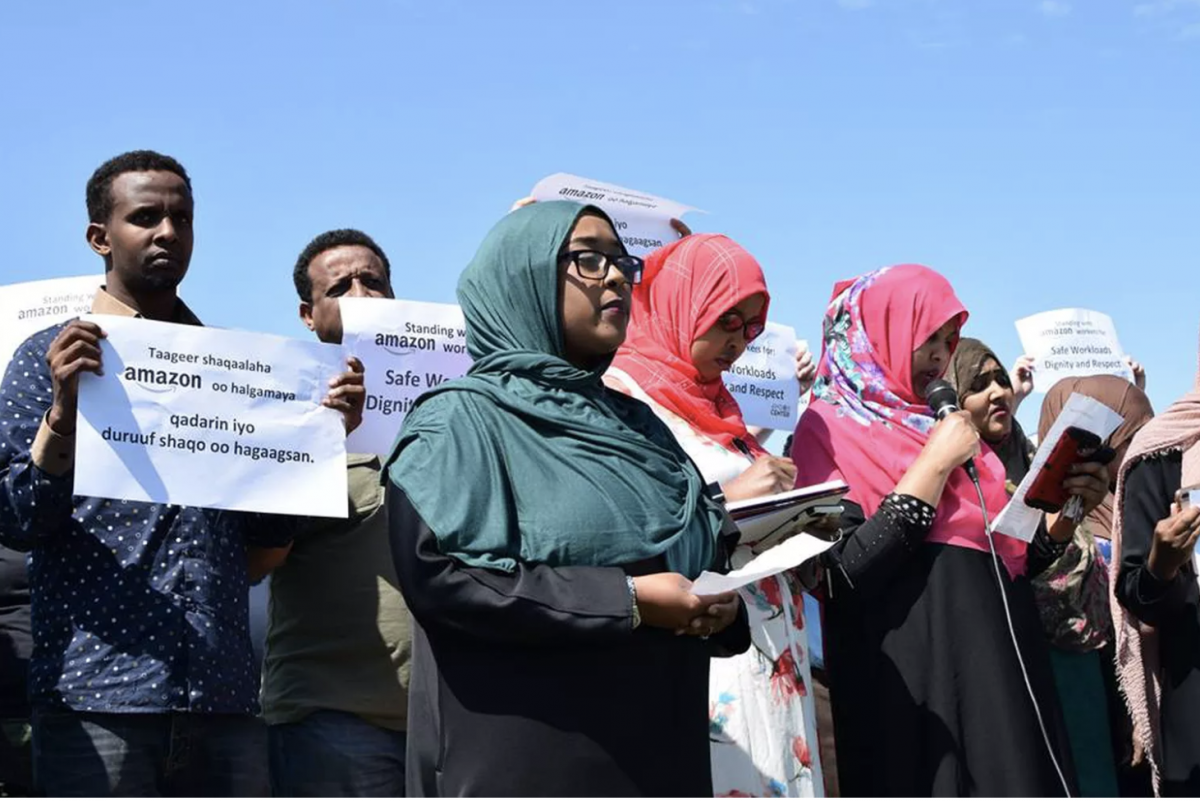 Something must be said of how Jews and Christians have managed to assimilate into the American workplace and Congress without constantly demanding special treatments.

Not only did the Muslim employees walk out to demand a more Islamic workplace, but the organizers of the protest chose to hold the protest during the busy holiday season, less than 2 weeks before Christmas, to “send a message” to Amazon.

Newly elected Congresswoman Ilhan Omar, who herself is a Somali who represents Minnesota’s 5th Congressional district, was present at the protest to demand Amazon become more Islamic. She suggested that making Muslims package holiday gifts in the factory stripped them of their “dignity”.

“On this holiday season, you all are doing the important work of making sure people are bale to celebrate cheerfully as they receive their holiday gifts. And what people are looking forward to is that happy celebration. And people who are going to receive those gifts, the packages that you guys are putting together, need to know that not every (Muslim) worker here is not fully happy. Their dignity is not being uplifted,” Omar said at the protest.

Proud to stand with @Amazon workers in Shakopee as they stand up and fight for fair treatment and safe, welcoming working conditions.

Omar, who is a practicing Muslim, is on the record making hateful remarks towards Jews and Christians. In 2012, Omar tweeted that Israel was “evil”, and just days ago, she mocked Vice President Mike Pence’s Christian faith on Twitter, sparking outrage from Christians.

So why do the Somali employees at Amazon and Ilhan Omar think they are so special?

The Somalis who protested are claiming that the working conditions at Amazon are poor because they “aren’t Muslim enough”.

However, since hiring large amounts of Somali refugees to work at the Amazon warehouse in Shakopee, Minnesota, Amazon has been more than accommodating to Muslim employees.

Besides taking on the burden of hiring many non-English speaking Somali workers, Amazon has also provided prayer mats for workers, converted a conference room into an Islamic prayer room during Ramadan, and changed shift transfers for workers who were fasting during Ramadan.

But the Somali workers are still complaining they don’t have enough time to pray.

When was the last time Amazon converted a conference room into a church or a synagogue?

The answer is never, because Jews and Christians have come to value and appreciate assimilation, and there is an understanding in the civilized West that one’s professional business is separate from their personal or religious business.

Not only are the Muslim employees demanding they be paid on the clock to pray, but they are also requesting Amazon pay reparations to “struggling Muslim immigrant families” in Minnesota to make up for all of the Muslim labor at Amazon, apparently failing to grasp the concept of a timesheet. Here in America, people are paid for their labor by the hour.

“It’s not a handout or a donation. This is so Amazon can give back into the community a portion of what they have taken so much of,” said Mohamed Omar, a local imam.

Newsflash Mohamed: You don’t get a bonus just because you’re Muslim.

Chinese Church Raided By Police - Here's How They Responded!