Following a TED Talk by Microsoft founder Bill Gates in 2010, in which he expressed that if a good job was done on “new vaccines, healthcare, reproductive health services,” Gates and company could lower the world’s population by 10-15 percent. With his calculations going from 6.8 billion going up to 9 billion people, that would result in the loss of people on the planet by 1,350,000,000. Some Mockingbird media outlets are holding to their fake news story, while other “fact checkers” are finally telling the truth about his talk.

First, take a listen to the relevant portion of Gates’ TED Talk.

It seems pretty clear what he is saying. He is discussing depopulation via “new vaccines, healthcare, reproductive health services.” There really is no other way to take what he is saying in the midst of a talk on CO2 reduction and lowering the population.

So, with that said, lo and behold, Twitter trending this on Wednesday morning:

“At a 2010 TED Talk about reducing carbon emissions, Microsoft co-founder Bill Gates said that one of the factors contributing to high levels of carbon emissions is population growth and that better health care could help lower unsustainable population growth, according to Reuters, The Associated Press, and FactCheck.org,” was the tag line under the headline on Twitter. 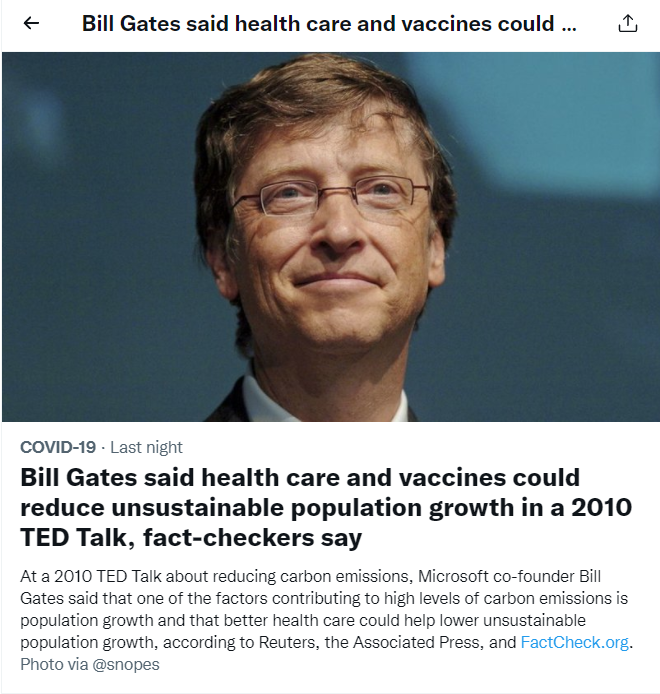 So, they are admitting what we’ve said and anyone with a working brain caught for themselves who listened to this talk.

Notice they reference Reuters, the Associated Press and FactCheck.org.

However, take a look at the Associated Press’ response in doubling down and misconstruing the important part of what Gates was saying.

“For months, false claims circulating online have twisted Microsoft co-founder Bill Gates’ 2010 comments about population growth. With these falsehoods resurfacing now, here’s an @AP story from January that lays out the facts,” the AP tweeted.

For months, false claims circulating online have twisted Microsoft co-founder Bill Gates’ 2010 comments about population growth. With these falsehoods resurfacing now, here’s an @AP story from January that lays out the facts. https://t.co/9ncsaVrF3k

Clearly, they made an issue out of someone declaring 3 billion rather than what he actually said, which would result in a loss of more than billion people.

Oh, and FactCheck.org, the self-proclaimed Ministry of Truth, tweeted out in March their “analysis.”

“A conspiratorial video circulating on Facebook misleadingly edits Bill Gates’ Ted Talk to suggest his “wish” was to depopulate the planet through vaccines,” the useful idiots tweeted.

A conspiratorial video circulating on Facebook misleadingly edits Bill Gates’ Ted Talk to suggest his “wish” was to depopulate the planet through vaccines. #scicheckhttps://t.co/64UVtfyRDb

Twitter claims that what we need to know is:

– Gates said in a 2010 TED Talk “Innovating to zero!” that improving public health using vaccinations can reduce unsustainable population growth, and with it, lower carbon emissions.

-“The billionaire philanthropist has spoken about the benefits of slowing the rate of population growth, but he has not advocated killing people.” — The Associated Press

This may make sense to some and I see how they are arguing, but has anyone been paying attention to the numbers of official deaths related to the COVID shots in just this year alone, not to mention the numbers of people who have probably been sterilized by these poisons being shot into their bodies?

Remember, Bill Gates is about turning over a 20 to 1 profit from “vaccines.”

He is also the man that could care less if nearly a million people suffer injuries from the shots as long as they get them.

And he’s even gone so far as to try and sweep adverse side effects away from the public eye to promote his cash cow of “vaccines.”

Me thinks the fact checkers are nothing more than useful idiots and they are covering for a much more sinister story, a story that most of us watching and speaking out against the current genocide going on in the US and around the world have been warning about for some time.

First, just look at Gates’ and his wife’s attacks on anti-vaxxers.

Bill Gates Demonizes Anti-Vaxxers: They Would “Let The Disease Continue To Kill People”

Let’s just look to Gates and his “vaccine” involvement with Africa to see whether or not this is about depopulation and control.

When It Comes To Vaccines, Who Is Really Killing Children, Bill Gates? (Video)

This is clearly an agenda, and a demonic one at that.

How October Has Been UN-ized In The US (Video)