Former Lee County Sheriff Rodney Shoap has not only taken the task up to write to Florida Governor Ron DeSantis about the questionable means that appointed Lee County Sheriff Carmine Marceno was able to fraudulently obtain certification in the state in violation of the law to be a police officer, but he has also written to the Florida Commission on Ethics concerning the complaint filed by Deanna Williams against Marceno concerning his unethical pursuit of her as a victim of crime and subsequent impregnation and demands for her to murder their unborn child.  Shoap has pointed out the lack of investigation by the Florida Department of Investigation (FDLE) based on Ms. Williams’ complaint, as well as FDLE’s response to it.  Now, the former sheriff has written to US Senator Rick Scott, the man that appointed Marceno as sheriff, urging him to pull back his support of Marceno due to his criminal and unethical activity.

In a letter dated September 12, 2019, supplied to SonsOfLibertyMedia.com, Shoap addressed Senator Scott stating that because Scott had appointed Marceno as sheriff at the request of former Sheriff Mike Scott, that he, in his official capacity as Senator, “may position yourself in support of Sheriff Marceno’s campaign to remain as Lee County Sheriff.”

Sheriff Shoap urged Scott to “give this careful consideration before lending support to this candidate.”

Shoap, as well as others, have called on Governor DeSantis, The Florida Ethics Commission and the Florida Department of Law Enforcement Professional Standards Division to provide a comprehensive investigation into both the behavior and conduct of Sheriff Marceno.

He writes the following:

Sheriff Marceno, while serving as the Undersheriff, and in his official capacity, established a personal relationship with Ms Deanna Williams who had reported a theft of funds to the Lee County Sheriff’s Office (LCSO). An active investigation was started by a detective in the Economic Crimes Unit on behalf of Ms. Williams’ complaint. Marceno interfered with the investigation being conducted by a LCSO detective and used his influence as Undersheriff to form a relationship with Ms. Williams that was sexual in nature. Marceno made the preliminary contact with the victim, Williams. Marceno had not received any request from the victim or any other persons engaged in the case investigation;

Ms. Williams Continues To Need Support Via Her GoFundMe Page Due To The Thefts Of Her Attorneys, The Injustices Committed By Sheriff Carmine Marceno And The State Attorney’s Office And Ft. Lauderdale Attorney Scott Mager, Which Can By Reach By Clicking Here.

Sheriff Shoap was not looking to “exonerate” Ms. Williams of her conduct, but pointed out that she has publicly stated that there was no excuse for her behavior.

However, he did write, “…one would have to understand Ms. Williams state of mind. She is the victim of a theft of $200,000 and in dire need for law enforcement assistance. Sheriff Marceno’s conduct has violated Florida Ethics laws. Keep in mind that other officers have been terminated for this exact same conduct.”

By the way, as a result of Marceno’s behavior, he added insult to injury as Ms. Williams was already the victim of $400,000 in theft by her attorneys, Ware Cornell and Mike Chionopoulos.  At this point, Marceno and the sheriff’s office, as well as the Amira Fox State Attorney’s Office failed to do their jobs in pursuing and prosecuting thieves and decide to turn it over to an organization that has no jurisdiction to deal with crime, the Florida Bar.

This has led to Ms. Williams not only being on her own to care for her pregnancy and unborn child at the time, but also without funds to defend herself in an ongoing lawsuit against her by Ft. Lauderdale attorney Scott Mager of Mager Paruas who is suing her for services he never rendered to her.  Mager is also knowingly in possession of at least $300,000 of stolen funds that belong to Ms. Williams.  A Bar complaint has also been filed against Mr. Mager.

Shoap also indicates, as I have, that Ms. Williams is not the only victim of Marceno’s unethical abuse of power.  There are other female victims who have made it known that Marceno took advantage of them as well, and that they have been made to fear, but with an investigation, they could remain anonymous and protected.

Ms. Williams Continues To Need Support Via Her GoFundMe Page Due To The Thefts Of Her Attorneys, The Injustices Committed By Sheriff Carmine Marceno And The State Attorney’s Office And Ft. Lauderdale Attorney Scott Mager, Which Can By Reach By Clicking Here.

The second part of Shoap’s letter deals with the crimes of impersonating a police officer and fraud committed by Marceno.

Shoap continued, “When reviewing Sheriff Marceno’s background, he did graduate from a Florida POST approved police academy. However, Sheriff Marceno has never served for 12 full months as a sworn police officer anywhere.  A FDLE form was submitted so that Marceno could take the exam and it lists Marceno as employed full time as a Suffolk County, New York Park Ranger. And Marceno may have served as a Park Ranger but according to all of his time sheets he served as a Part Time Seasonal Ranger, nothing more. That negates Sheriff Marceno’s qualifications to take the certification exam and puts in jeopardy any arrest(s) he has made or supervised as well as any training he has conducted. All could be vacated once challenged in any court of law.  The FDLE form was simply in error.” 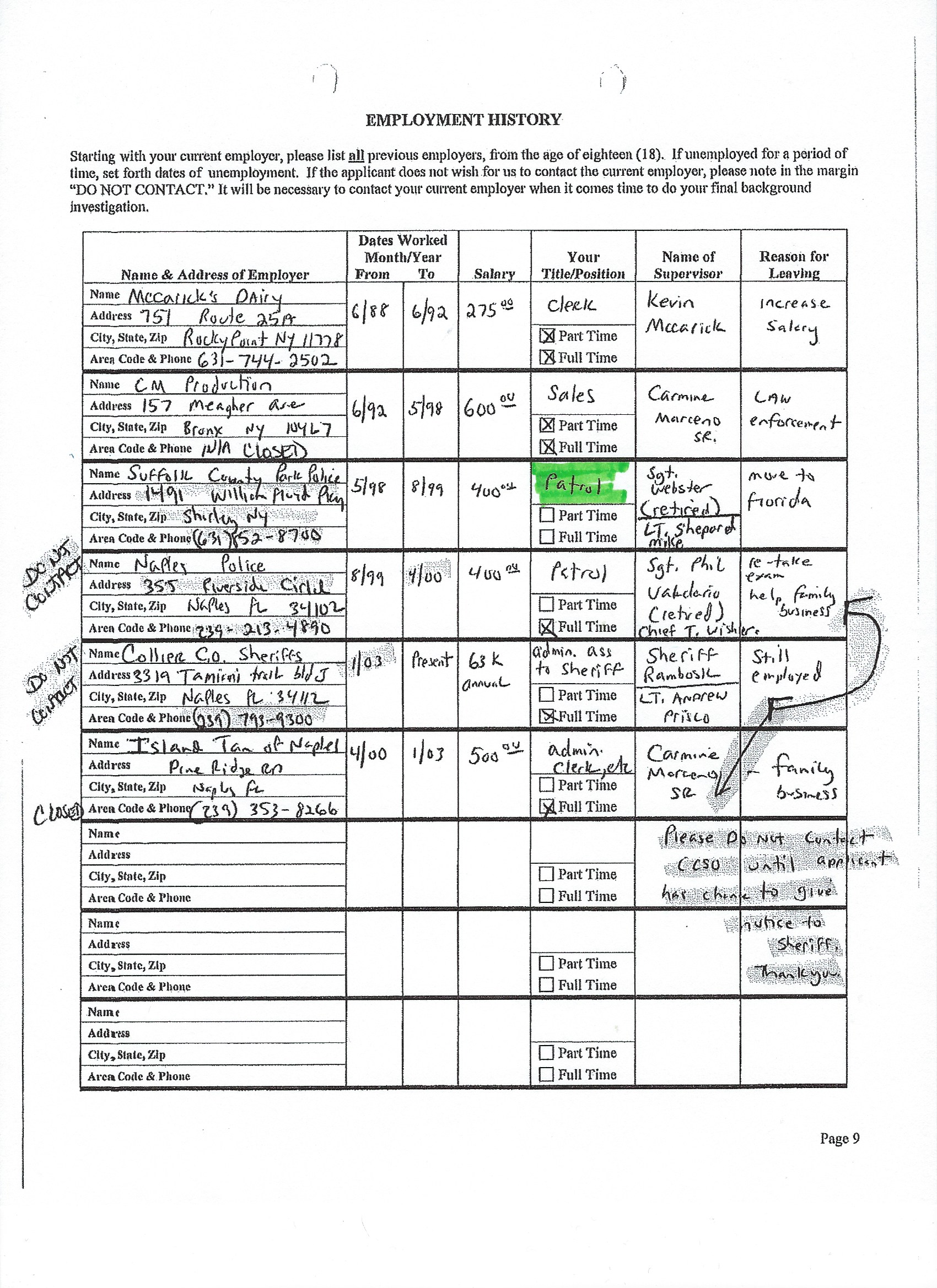 “In addition, there is an issue involving Sheriff Marceno’s applications for employment,” Shoap added.  “When comparing his Naples Police Department, Collier County Sheriff’s Office and Lee County Sheriff’s Office applications, his past employers along with dates of employment do not match and some areas are not complete such as the question: were you full time or part time being left blank. That question coincides with the FDLE form that listed him as full time when he was not.”

“These application issues, if substantiated, could be criminal and civil in nature,” he concluded.  “Further, these applications are under oath and require the applicant to be truthful or face criminal penalties.”

Finally, I’ll add that Marceno’s own hand penned that he was “part time” and not full time while working in Suffolk County, New York.

Back in April, I reported on these documents that exposed his fraud and felonious activities in Florida.  Among the documents I provided were his time sheets and other documents from Suffolk County and Naples Police Department.  See them below.

Sheriff Carmine Marceno’… by on Scribd

Notice on page 9, is where Marceno states clearly that he is “part time.”  As I have documented, Marceno only worked “full time” at this part time- seasonal job for 20 weeks, a far cry from 12 months.

Considering that all the information here cannot be true any more than WTC 7 fell due to the claims of the government, it is clear that Marceno is guilty of fraud, and a violation of the state’s laws concerning impersonating a police officer, a felony which carried a prison sentence of up to five years.

“As a former Sheriff of Lee County, Florida and as a 50 year resident with family and friends still residing there, Senator, I request you do NOT endorse Sheriff Marceno’s campaign.,” the former sheriff wrote.

Consider that if Marceno would not have been sheriff, it is highly possible that Ms. Williams may have received some justice in the matter that she approached the Lee County Sheriff’s Office.  Instead, she was victimized over and over because the state of Florida simply dropped the ball and let a criminal not only work in law enforcement for over a decade, but become the top cop in Lee County.

As a final note, let me address Marceno’s lack of denial of his crimes and wrongdoing.  Marceno was given the opportunity to respond to Shoap’s complaints, but all he did was attack, not deny the allegations nor did he provide a response for the documents that expose his fraud and crimes.  People must keep their eye on the ball here and not be swayed with political language, but with the law and the facts, and the facts are simple:  Marceno committed fraud to obtain a position as a police officer and that eventually led to him being appointed as sheriff.  He then abused his power to interject himself and pursue a victim of crime for a sexual relationship only to impregnate her and demand she murder their unborn child.

Is this really a man you want to endorse Senator Scott?  You’ve already made the mistake of appointing him.  Do you want to add to that terrible judgment?