Home»US»Florida: Attorneys Could Collectively Face Over 100 Years In Prison For Grand Theft, Possession Of Stolen Funds & Fraud
US

As I have reported concerning the ongoing case of Deanna Williams in Florida, much of that reporting has now centered on the crimes and ethics violations of Lee County Sheriff Carmine Marceno.  However, in an attempt to not let the crimes committed against Ms. Williams be ignored in that coverage, I believe it best to provide a simple article that points out that there are several Florida attorneys who have engaged in grand theft of Ms. Williams’ money, and it ultimately is due to the failure of attorney Gloria Allred to fulfill her agreement with Ms. Williams to pay her previous attorneys in a civil case regarding the rape of Ms. Williams by a Major League Baseball player.

Ms. Allred, along with her partner Nathan Golberg and Florida attorney Jonathan Heller provided a signed retainer agreement to Ms. Williams to settle her case and pay her previous attorneys for an unnamed six-figure amount in addition to their share of the settlement for their services.  This was never paid to the attorneys, specifically Michael Dolce and John Clune.

As a result, Dolce and Clune sued Ms. Williams not only for services they provided, but they also sought to get a percentage of her settlement after they bowed out of the case which was based on a contingency.

Jonathan Heller was the attorney brought in by Allred and Goldberg to handle Ms. Williams case.  Ms. Williams alleges that Heller also took upwards of $170,000 in addition to the above payments she agreed to via her retainer agreement.  He also took this money from her without her permission.  She also alleges that he behaved inappropriately towards her on several occasions.

Ware Cornell had a retainer agreement with Ms. Williams in which he was to be paid a substantial sum of money per hour for his representation of her in the case.  However, according to Ms. Williams, after he took the case, he spoke to Ft. Lauderdale attorney Scott Mager.  Following that conversation, Cornell entered his appearance not in the case Ms. Williams hired him to represent her in, but in the inactive rape case that had already been settled.  As a result of his malpractice, a default judgment was entered in against Ms. Williams in favor of plaintiffs in the case.

When Ms. Williams found out about it, she also discovered that Cornell had intercepted a payment due her from the rape settlement in the amount of $200,000.  She found this out after she sought to terminate her representation by Cornell and seek new counsel.  However, it was then that Cornell informed her she wouldn’t have money to obtain new counsel as he had promised those stolen funds to attorney Scott Mager.

Ultimately, those funds were disbursed to Ms. Williams and Mr. Mager by Lee County Judge Jay B. Rosman, who was busted mere weeks later in a prostitution sting.

Mager is knowingly in possession of $100,000 from that theft and Rosman oversaw the transfer of that money.

This theft is ultimately what pushed Ms. Williams to go to Lee County Sheriff’s Office and report it as a crime, which neither LCSO nor the State Attorney’s Office under Amira Fox were willing to take on.

Michael Chionopolous, a former Oklahoma judge who was ousted by his own peers after questionable behavior was then hired by Ms. Williams to replace Mr. Cornell.  However, Mr. Chionopolous also ended up turning over another $200,000 due to Ms. Williams to Mr. Mager.  Though he filed a motion with the court, including an affidavit that declared the “agreed entry,” which was not agreed upon, was a fraud entered by attorney Scott Mager, he failed to set it for a hearing, ultimately resulting in Mager holding onto another $200,000 in what should be considered stolen funds from Ms. Williams.

Emails also indicate that Chionopolous may have conspired with Mager to not only get that money from Ms. Williams but to sway her to “joining forces” with Mager to sue Gloria Allred for a seven-figure amount.

Scott Mager is a Ft. Lauderdale attorney who did not provide a single service to Ms. Williams.  Yet, he was allowed, according to Ms. Williams and several other attorneys, to purchase the rights to sue her from Michael Dolce.  He was also allowed into the case by Judge Rosman, the man busted in the prostitute sting.  Mager has been informed that he is in possession of $300,000 of Ms. Williams’ stolen money though he is seeking to disguise it “legally” via the court’s judgment.

Mager would not establish a deposition of Ms. Williams as the court demanded and after the deadline for doing so passed, Mager asked the court to arrest Ms. Williams despite possessing over a quarter of a million dollars of her money that he knew was stolen from her.

Ms. Williams has filed a complaint with the Florida Bar indicating his possession of these stolen funds, as well as his unethical practices.  As a result, it appears that Mr. Mager is attempting to whitewash his crimes by finally notifying the court about the funds.  However, take a look at the document below and you will see that he refers to them as “payments.” 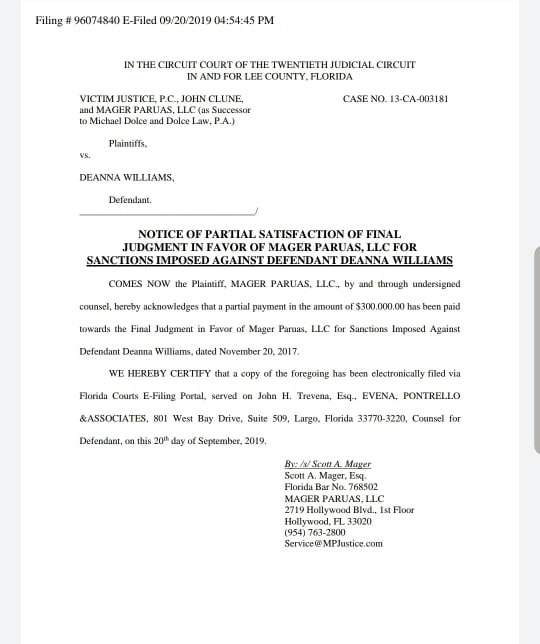 Why is this important?

This filing comes just weeks after the Florida Bar complaint by Ms. Williams.  It appears to be an attempt on the part of Mager to try and cover his crimes by using the court to do so?

Further, one must ask, if these were, in fact, “payments,” then there are several questions that must be asked of Mr. Mager:

According to Florida law, first-degree grand theft is theft of property that is valued over $100,000 or falls into a specific type (law enforcement vehicle, for example).  It is a felony. The penalties include up to 30 years in prison and a fine up to $10,000.

Each of the above named has been alleged to have committed grand theft against Ms. Williams, except Ms. Allred, who did take a six-figure amount of money but failed to properly render the services she agreed to render, resulting in the ongoing legal fight and thefts against Ms. Williams.

For Mager’s part, according to law enforcement experts, his knowing and willful possession of those stolen funds could earn him the same judgment as those who stole them.  In other words, he could be charged with grand theft as well.

This is the reason that Ms. Williams needs support.  If you were in this situation and hundreds of thousands of dollars was stolen from you that would have provided you a defense, would it put you in a pickle?  You know it would, and on top of that, she is single, was pregnant for a short time and has multiple sclerosis.

If you are inclined to aid Ms. Williams in her fight for justice against these attorneys and the negligence and unethical practices of the Lee County Sheriff’s Office and the State Attorney’s Office, please click here to visit her Go Fund Me page and donate.