Home»US»Attorneys Now Seek To Make Rape Victim Not Only Pay More Than Her Settlement, But Force Her To Pay For A Deposition They Want
US

Attorneys Now Seek To Make Rape Victim Not Only Pay More Than Her Settlement, But Force Her To Pay For A Deposition They Want

As I reported previously, Deanna Williams was a victim of rape in 2009.  Following a settlement she obtained in 2012 through her attorney Gloria Allred, Williams received a settlement that has now been disclosed by attorneys suing her for an amount when added to what she paid Allred and her attorney team more than than the settlement she received in the civil case.  Now, the attorneys who have sued her are adding insult to injury by threatening to petition the judge in the case to require Williams to go across the state and be deposed, but they want her to pay for it.

Andrew Winston of The Winston Law Firm, who is now representing Scott Mager of Mager/Paruas, wrote an email to Williams’ attorney, in which she was cc’d and provided a copy to me wrote:

Thank you for the financial affidavit.  However, it is incomplete, not sworn, and the attachments required are not complete.

Attached hereto, please find the Duces Tecum schedule of documents we will require Ms. Williams bring with her to her deposition (note, particularly, the final four items).  Please have her review and advise how much time she will require to gather these documents.  We can, thereafter, coordinate deposition dates.  Given the procedural history and Ms. Williams’ prior non-compliance, we intend to request the Court at Monday’s hearing to require her to appear for deposition in Broward County, and that she pay the cost of the court reporter and transcript.

Let’s stop and remind readers about the failure of Mr. Mager to actually schedule a deposition within the proper time frame given to him by the court, as well as a response he provided to the Florida Bar in a complaint response regarding said deposition.

First, it should be noted that Mr. Mager wanted to depose Ms. Williams and was to do so by March 27, 2019.  Here is the record of attempts Ms. Williams made to set up deposition with Mr. Mager after her last attorney Daniel J. Endrizal, III withdrew from the case on March 19, 2019.

Scott Mager’s assistant said that he would be available for deposition on April 17, 2019, nearly three weeks after he knew the court had set a date on, and Mr. Mager has been the one pressing the court to go after Ms. Williams.

However, in a response to the Bar complaint against him, Mr. Mager wrote that he received a copy of her financial statements on March 20, and when she contacted him the next day for deposition to be scheduled, she was consistently told April 17, 2019, which she said did not comply with the court.

Furthermore, Mager stated in his response that Williams was told that she had to be deposed 20 days from his receipt of her 1.977 form.  April 17 is nearly a month from the time that Mager claims he received the form.  So, he’s not even being true to what he claims in his Bar complaint response.

This is not the first time that Mr. Mager has done this.  Take a look at this. 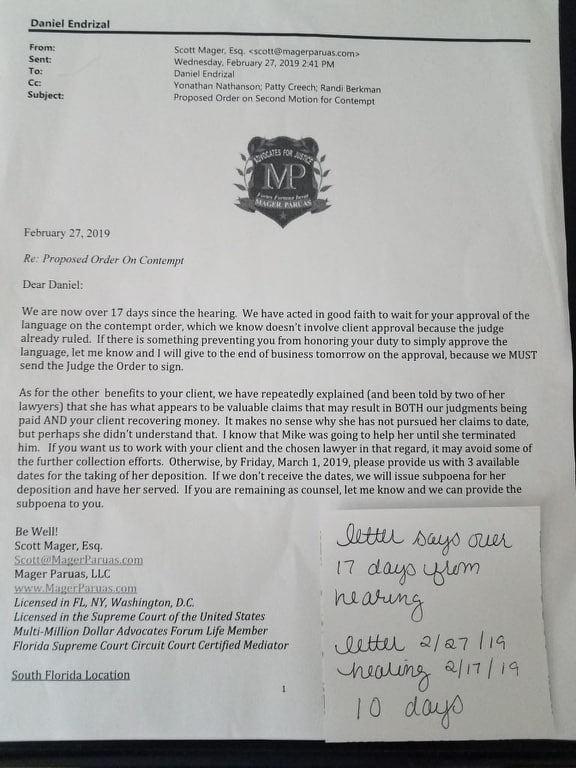 Did Mager issue a subpoena?  No.  Instead, he pursued to have Ms. Williams arrested via a push for contempt.  Remember, she is a victim of rape, has multiple sclerosis and was in the midst of a high risk pregnancy, in which she gave birth to a stillborn baby boy as result of the added stress and pressure brought on by an attorney who didn’t provide one service to her, but believes he is entitled to over a million of her money and sought to have the court arrest her by the very man that not only took advantage of her when she went to the sheriff’s office to report a crime, but impregnated her and threatened her when she would not murder the child.

The Bar complaint against Mager by Ms. Williams is currently ongoing and over 100 pages of documentation that cites Ms. Williams’ claims against him and other attorneys have been submitted.  The Bar will not comment until the investigation is complete.

Scott Mager has been contacted numerous times for comment regarding several claims made by Ms. Williams and court documents such as an affidavit filed by attorney Michael Chionopoulos on behalf of Ms. Williams claiming that an agreed entry contained language that was never agreed to in which Mr. Mager received $200,000 of Ms. Williams money.

Only after filing the Bar complaint against Mr. Mager, did he inform the court of what he calls a $300,000 payment, which he had in his possession for at least a year and some of the money for 2 years.  Ms. Williams claims the money was stolen due to fraud upon the court and theft by her own attorney.

Ms. Williams is now fighting simply to survive while Florida attorneys can only think about how they can get their hands on a lot of money, never showing the slightest concern for the loss of Williams’ child.

If you would like to help Ms. Williams, she has a Go Fund Me page set up.  You can donate by clicking here.

You can contact Governor DeSantis on behalf of Ms. Williams below:

Additionally, you can contact Attorney General Ashley Moody on behalf of Ms. Williams below:

Finally, it may even help to contact the Florida Bar on Ms. Williams’ behalf to see if they will begin to investigate ethics violations, negligence and corruption that appears to have taken place with regards to Ms. Williams’ representation, legal agreements and rulings by judges in the cases.

WATCH: Cop Walks Up to Innocent Ex-Marine in His Own Backyard & Kills Him

As Roger Stone Is Found Guilty On All Counts, Calls For Immediate Arrest & Indictment Of Alex Jones Are Coming Forward - Who Is Next?

Attorneys Now Seek To Make Rape Victim Not Only Pay More Than Her Settlement, But Force Her To Pay For A Deposition They Want